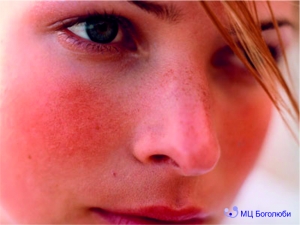 Rosacea (pink acne) – is a skin disease that affects mainly the central areas of the face. This disease affects over 400 million people in the world. More often, rosacea occurs in people with fair skin, in 3 out of 4 cases - these are women from 30 to 60 years old.
Although rosacea is amenable to relative control using various therapeutic methods, the disease is classified as chronic and its effect on appearance has negative psychological consequences.

Scientists have not yet fully clarified what are the true reasons of rosacea. According to some researchers, this occurs when blood vessels expand too quickly.
It is also believed that the propensity for this disease is hereditary. The aggravation of pink acne is caused by: warm and hot baths, excessive humidity, strong winds, insolation, low temperatures, hot and spicy foods and drinks, alcohol and caffeine consumption, menopause and emotional stress.

The main signs of the disease are:

As mentioned above, redness with rosacea is concentrated on the central areas of the face - the forehead, nose and chin. It may be accompanied by burning and slight swelling.
When pustules appear, a bacterial infection is suspected. However, to date, confirmation of the connection between rosacea and bacteria has not been found.
You should also know that rosacea is not contagious. In some patients (especially men), the nose swells, thin red lines appear under the skin due to dilated vessels.
The symptomatology of the disease is variable, periods of inflammation alternate with phases of remission and the complete disappearance of symptoms. Almost half of those suffering from rosacea have vision problems: a feeling of sand in the eyes, tearing, inflammation of the eyelids, photophobia.

Due to the uncertainty of the causes of the disease, getting rid of rosacea is difficult. Sometimes a positive effect is observed with the use of local and oral antibiotics in the presence of pustules.
Red lines can be treated with laser and electrosurgery. Surgical removal of excess skin is recommended for patients with a swollen nose with growths. Typically, such an intervention significantly improves their appearance.
In case of eye problems, the eyelids should be thoroughly cleaned with special detergents, anti-inflammatory drops are prescribed, warm (but not hot), compresses several times a day.

Although it is not possible to prevent the onset of this disease, it is imperative that patients be aware of ways to reduce the frequency and intensity of inflammatory episodes. To do this, avoid exposure to known provoking factors. Be careful with:

Keep a diary to mark, after which exactly the aggravation of the condition occurred. When going outside, always apply sunscreen to protect your skin from ultraviolet rays. The protection factor (SPF) of the product must be 30 or higher.
Use a non-aggressive moisturizer if you have no negative reaction to it. For partial masking of imperfections, a high-quality high-density hypoallergenic concealer will be useful. If you develop symptoms of rosacea, consult a dermatologist at Bogoliuby MC for timely diagnosis and the appointment of adequate and effective therapy. 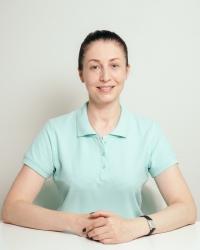