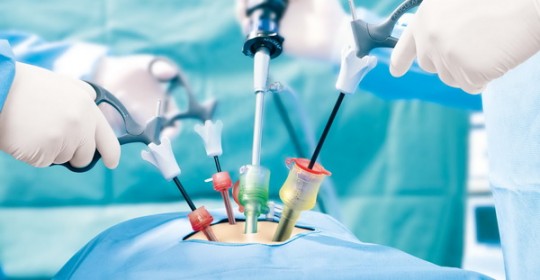 In this article, I would like to talk about an important surgical method that is often used in our Center for Reproductive Medicine, namely laparoscopy.

Laparoscopy -from Greek «laparo» и «scopeo» literally translates as «watch the womb», this is a modern method of surgical intervention, in which the internal organs are operated through small holes using a  laparoscope. A laparoscope is a tube equipped with an optical system and attached to a video camera. In order to create an operative space, the patient’s abdominal cavity is usually filled with carbon dioxide, which allows the abdominal wall to rise in a kind of dome.

Let us turn to the history of the above method. Laparoscopic surgery was first performed by a German surgeon Georg Kelling on a dog in 1901 in Berlin. Then the surgery was called «celioscopy», ", a cystoscope was inserted into the abdominal cavity of the animal. The term «laparoscopy» " was coined by the Swedish surgeon Hans Christian Jacobeus, after he performed the first laparoscopic surgery on a person in Stockholm.

In the following decades, scientists worked hard to improve and popularize laparoscopy, but the use of fiber optic technology was, of course, a powerful impetus in the development of the method. A similar innovation made it possible to design a larger image of the operation field on the monitor.

As for the  advantages of laparoscopy, one cannot fail to note its low invasiveness and shortened hospital stay (2-3 days). After laparoscopic surgery, there is practically no pain in the healing period. . A significant advantage is also the cosmetic effect, since there are no postoperative scars. Laparoscopy allows for more detailed visualization of the organ, tissue structures are more clearly differentiated.

Types of laparoscopy in gynecology

The following types of laparoscopy are carried out on the basis of the Bogoliube Center for Reproductive Medicine: