Peritoneal commissures: how to avoid infertility 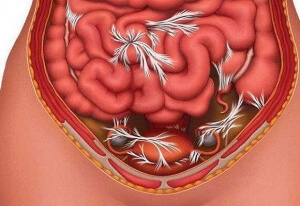 According to statistics, 15% of girls who have had appendicitis removed before the age of 10 will have fertility problems in the future, that is, they will become infertile. The reason is adhesions that form in the body in nine out of ten people who have had surgery. Where the compounds come from and how to prevent their formation, are advised by chief physician of the «Bogoliuby MC», obstetrician-gynecologist, first category doctor, Ph.D. in medical sciences  Vadym Petrovskyi.

What are compounds and why are they formed?

Adhesions are connective tissue constrictions, films, continuous or in the form of a web, which forms the body in response to the aggression that it received. At first they are in a liquid state, and then they condense.
At its core, adhesions are traces that remain in the body (in this publication we will talk about the abdominal cavity and pelvis) after the human body has had contact with the external environment. This, for example, occurs during surgery, when the body contacts the hands of the surgeon.
The fact is that the surgeon operates with gloves on. They are made of an aggressive substance for our body, in addition, sprinkled with talc. And due to the fact that the surgeon cuts the stomach and begins to mobilize organs to get the pathological process, after the operation, connections begin to form.

Can commissures form in a person who has not been operated on?

Without surgery, the formation of adhesions is also possible. Namely, with infectious diseases of the abdominal cavity or pelvis. For example, in diseases such as  gonorrhea, chlamydia, typhoid fever, tuberculosis, etc. The fact is that the pathogen that enters the stomach acts as aggressively as the surgeon's hands, as the environment.
And in response to his aggression, the body also forms adhesions. It must be said that adhesions (no matter how bad they would be) are essentially a protective factor of the body. For example, in order to prevent the pathological purulent process from spreading to the pelvis, the body forms compounds that mechanically limit the spread of this process. This is both good and bad at the same time.

How often does adhesive disease occur and why is it dangerous?

After surgery, compounds are formed in 90% of people. But some people have fewer and they do not violate the functions of organs, while in others there are more and they violate the functions of organs. The most common consequences of the adhesive process in general surgery are intestinal obstruction (obstruction of the small intestine) and complications associated with fertility (female infertility  of the adhesive genesis).
According to statistics, 15% of girls who underwent surgery for appendicitis under the age of 10 years will have fertility problems, that is, they will become infertile. And this is a common banal appendicitis!
If we talk about bowel surgery or surgery to remove tumors, the incidence of adhesion infertility in women is approximately 90%.
Therefore, adhesive disease is the number one problem in general surgery in general and specialized surgery in particular. And for a hundred years now, humanity has been racking its brains over how to deal with it.
The greatest danger of adhesive disease is that when we operate and successfully disconnect the compounds, they can subsequently form again. And so it can go on ad infinitum. Science knows cases where people had to piece out most of the small intestine, because adhesive disease did not recede.

What are the consequences of the compounds?

The most common consequences of adhesive disease in the female body is infertility. If we talk about intestinal obstruction, it can be acute and chronic.
Acute intestinal obstruction is indicated when, within 21 days after surgery, a person feels a sharp pain in the lower abdomen, loses appetite, bloating, vomiting, general weakness appear. Gradually, the pain increases, sometimes there is diarrhea, but subsequently the stool stops. As a rule, such people end up in the emergency surgery department and urgently need surgery. Late small bowel obstruction due to adhesive disease also occurs.
It develops later than 21 days after surgery. In this case, the symptoms of intestinal obstruction are the same.

How are adhesions diagnosed?

СAdhesive disease is not difficult to diagnose. If a person entered a medical institution with intestinal obstruction or with infertility, and she had a history of surgery or inflammatory process in the abdomen, it is very likely that this is a consequence of adhesive disease.

In this case, endoscopic diagnostic methods are used, which allow you to see the formation of adhesions clearly.

Can a risk group be identified? Who is more prone to adhesions? The tendency to the formation of adhesions is purely individual. One person may have a minimal laparoscopic puncture - and connections will form, and the second will make a large incision - and there will be no adhesions. It depends on genetics, the immunological response of the body, and many other factors that trigger the formation of adhesions. But science is not exactly clear.

How to deal with adhesive disease? Can adhesions be prevented?

To date, there are two effective methods of combating adhesive disease.
The first is the use of minimally invasive methods, such as  laparoscopic surgery.With this type of operation, there is no contact of internal organs with the external environment, since surgeons operate through special ports, and there is also no contact with the surgeon's hands. It should be noted that with this method, adhesive disease can also develop, but at times less often - in about 20% of cases.
The second method of combating commissural disease is when, after the operation, special mediators are called in the stomach, which are called anti-sound barriers. They have the appearance of a liquid or gel. This substance envelops internal organs and does not dissolve for several days, preventing the formation of adhesions.
This is especially important during the first seven days, because it was at this time that compounds formed predominantly. Thus, by limiting the contact of organs with the external environment and creating against nodule barriers, the main factors that cause adhesive disease are eliminated. Despite the fact that science has advanced in this direction, it has not been possible to completely overcome the problem of adhesion formation and still does not succeed, because by its very nature, compounds are a protective mechanism in the human body.