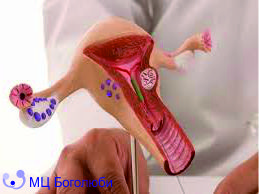 The Zerviczlis bouginage procedure is an intervention recommended by reproductive health professionals to restore patency between the vagina and the uterine cavity. The normal function of the female reproductive system is impossible without sufficient patency of the cervical canal.
However, with its atresia (fusion), difficulties arise with the outflow of menstrual bleeding, and this carries the risk of serious complications. In addition, difficulties are observed when performing therapeutic and preventive procedures. Also, male reproductive cells from the vagina to the uterus pass through this channel, and in case of its narrowing or overgrowth, conception does not occur. Finally, patients with this pathology cannot give birth on their own, and surgical care is required.
The first step to overcome this problem is to make an appointment with the specialists of the Bogoliuby Medical Center. To restore the patency of the cervical canal, doctors carry out its instrumental expansion. The name «bougienage» comes from the word «bougie». This is such a special tool that intervenes.
Doctors of Bogoliuby MC perform the procedure of boogie-up at the highest qualification level. The experience and professionalism of the center's employees make it possible to perform the bougie work qualitatively, quickly and without negative consequences.

When to go to the doctor?

You should know that the cervical canal can overgrow either partially or completely during menopause. In young women, this happens after:

It is necessary to distinguish narrowing and atresia of the cervical canal from stricture, when cicatricial deformities are the cause of obstruction. The anomaly is diagnosed on the basis of symptoms and appropriate diagnostic tests (examining an endometrial sample for cytology, conducting bacterial culture on the flora).
To exclude the presence of neoplasms, a biopsy is prescribed. Particular attention requires a state of congenital atresia. Its causes are often: syphilis, herpes, , toxoplasmosis, maternal chlamydia; the effect on the pregnant woman of ionizing radiation; side effects from medications that were taken in the 1st trimester of pregnancy.
In the case of congenital atresia, false  amenorrhea - is observed - the girl has all the signs of the menstrual cycle, except for the bleeding itself. Due to the accumulated blood, which cannot find a way out of the uterus, the organ is excessively stretched, which is accompanied by severe pain.
In this case, the cervical canal must be made before the girl has menarche.

As before any surgical intervention, a woman must first undergo comprehensive examinations, which include: laboratory tests of urine and blood (including for HIV, hepatitis, TORCH infections), a vaginal smear, colposcopy, ultrasound, ECG.
Bogoliuby MC is equipped with a modern diagnostic laboratory, so all the tests can be passed, without wasting time, directly in our center.

How does this happen?

Determining the optimal time for bougieurage, the doctor takes into account the phase of the menstrual cycle and the patient's history. The intervention is carried out under anesthesia, whether it will be general or local - the specialist decides, based on the state of health of the woman.
The time it takes for the operation is about thirty minutes. The lumen of the cervical canal is expanded with bougie, introduced through the vagina. And in order to choose the correct tool path, a hysteroscope is used. After the operation, it is necessary to remove the fluid that has accumulated in the uterine cavity.
In order to return to the usual way of life, it does not take much time, however, in the postoperative period, all medical prescriptions should be followed. Only in this case, the rehabilitation will be successful. In order not to encounter the problem of channel obstruction in the future, it is important to follow preventive measures.
. To do this, it is necessary to treat any inflammatory processes associated with the reproductive system in time, and expectant mothers to adhere to the basics of a healthy lifestyle.