Polyps of the gastrointestinal tract 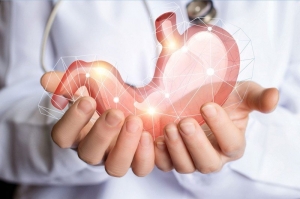 In recent decades, there has been a significant increase in the number of patients with gastrointestinal polyps worldwide. This can be explained not only by the growth of this pathology, but also by the rapid development and improvement of endoscopy - the main reliable method of diagnosing this disease.

Polyps on ymayut special place among diseases of the gastrointestinal tract, primarily because , in some cases, they are prone to malignant transformation. There are no reliable symptoms characteristic only of polyps, which greatly complicates the diagnosis.

The causes of polyps have not yet been definitively studied. The most popular theory of his wines yknennya: nutritional, inflammatory and infectious.

The basis of the alimentary theory is the assumption that the pathological regeneration of mucosal cells is associated with irritation by alcohol, crude fiber, very hot or cold foods, as well as chemical additives that have mutagenic properties .

Inflammatory theory suggests a violation of the regenerative process and the development of atrophy due to chronic inflammation. And the infectious theory, in fact, clarifies and complements the inflammatory theory.

Symptoms of polyps depend on the location. So polyps of the esophagus are usually asymptomatic , they are detected by "accidental" gastroscopy. If the polyps are large, the patient has difficulty swallowing food ( dysphagia ), vomiting, nausea, foreign body sensation in the esophagus. Periods of remission are sometimes observed. At a young age, with rapid progression of the disease, rapid malignant degeneration of the polyp is possible.

If we are talking about gastric polyps , then abdominal pain is due to the severity of the background inflammation . B il localized in the abdominal area, initially associated with food intake, but later no longer depends on it. Polyps on the leg are able to fall into the duodenum.

Polyps can be covered with ulcers, with minor bleeding, blood is found in the vomit . In this case, there are symptoms characteristic of blood loss : weakness, anemia, pale skin. Malignant polyp regenerates gradually, the patient loses appetite, loses weight.

The leading method of diagnosing polyps of the gastrointestinal tract - endoscopic examinations. And gastroscopy and colonoscopy (with and without anesthesia) mo zhna go to the Medical Center " Boholiuby " . Procedures allow to determine the location, shape and size of polyps, if necessary - to make a biopsy and decide on further therapeutic tactics.

Treatment of polyps of the gastrointestinal tract involves their removal. The decision about the need for polypectomy is made by an endoscopist , who takes into account the shape, location, size of polyps, as well as the results of laboratory tests.

If polyps are small, less than 5 mm, the endoscopic observation of their noyu dynamics should be carried out every six months. After polypectomy, control studies are performed once a year.

The purpose of prevention of polyps of the gastrointestinal tract - early detection of formations. Endoscopy is recommended as a screening for all persons over 45 years of age, even if there are no symptomatic preconditions. Based on the principles of oncological vigilance, special attention should be paid to patients whose anamnesis is burdened by oncology of the gastrointestinal tract.

1      5
What do we offer in your case? Tell us about your problem and we will help you! Tell about your case