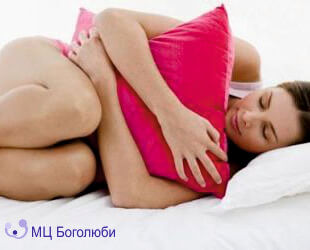 Amenorrhea  is the absence of menstruation. It should be remembered that there are periods in a woman’s life when this state of affairs is physiological: before puberty, after  menopause, during pregnancy, and for a more or less prolonged time during breastfeeding. In other cases, the cause of amenorrhea can be mental trauma or serious diseases of the female genital area.

A change in menstrual function (especially the absence of menstruation) is, of course, an alarming signal. First of all, it is necessary to distinguish between  primary amenorrhea, which occurs in girls or women who, despite their puberty, have never had menstruation, and ,  secondary amenorrhea, which appears after the period during which menstrual function has been maintained.

Among the possible causes of primary amenorrhea can be severe genital malformations - the absence or insufficient development of the ovary or uterus. But there are cases when ovarian functions are preserved: these girls during puberty have normal body development, with the appearance of hair in the pubic and axillary regions, developed mammary glands and external genital organs, but do not have menstruation. It is believed that in these cases, the uterus is insensitive to hormonal influences (estrogen and progesterone).

Thyroid problems can also cause primary amenorrhea. Not the last role is played:

The causes of secondary amenorrhea are

Extragenital causes: a state of acute malnutrition can lead to interruption of menstrual function, as well as a sharp climate change, nervous, mental overwork, constant stress.

In addition, girls who are too zealous in sports often have the so-called “athlete triad”, which is characterized by amenorrhea, osteoporosis and digestive disorders.This condition is often found among professional athletes.

To help the patient overcome the existing problem, the doctor, first of all, must find out the reasons that led to the anxiety state. Do not forget that only by eliminating them is a cure possible. In case of disturbing symptoms, contact the  gynecologists of the Bogoliuby Medical Center.