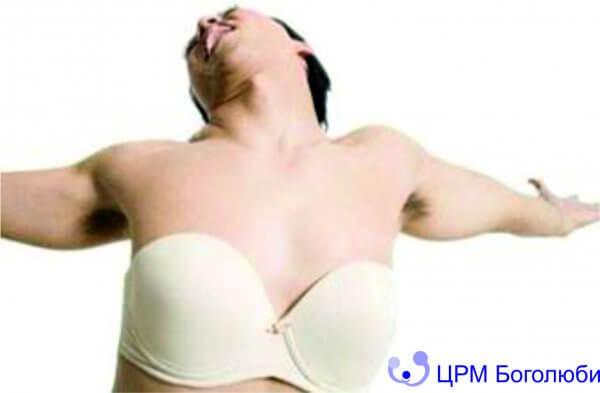 Gynecomastia is a term that indicates enhanced breast development in men. As a result of the disease, the patient has breasts growing, like a woman. This similarity in most cases creates complex psychological consequences. Naturally, life with such a violation can lead to problems in the social and sexual sphere.

The causes of gynecomastia are numerous, among them are: genetic, hormonal, pharmacological. The main culprit of gynecomastia, experts consider a change in hormonal balance. In particular, there is an imbalance in the metabolism of testosterone and estrogen in favor of the latter.

Over the past few years, experts have talked a lot about the so-called "food estrogen." Under this term, products are enriched with substances that have a special affinity for estrogens. Currently, more than one hundred chemical compounds are known that have such harmful properties. These include: pesticides, livestock growth stimulants, drugs for humans and those used in veterinary medicine.

Gynecomastia is classified according to its origin:

Gynecomastia can also be classified into::

Gynecomastia can be one-sided or bilateral, initially manifested by increased sensitivity in the nipple. Later, edema associated with the deposition of adipose tissue and an increase in glandular tissue joins.

The diagnosis is made on the basis of palpation and ultrasound.  Ultrasound  is prescribed to resolve any doubts regarding the tumor origin of breast augmentation. Today, gynecomastia is quite common. It is estimated that in the future, in the industrialized regions of the country, the incidence rate will increase.

Treatment and prevention of gynecomastia

In order to prevent gynecomastia, the following rules must be observed: do not overdo the consumption of meat products, enrich your diet with a high fiber content (increase the number of fruits and vegetables), follow a program of regular physical activity, control body weight, as obese people have significant testosterone levels decreases, and estrogen levels increase.

If we are talking about true gynecomastia, then the regression of the disease can occur only during puberty. In adulthood, the possibility of spontaneous regression is very small, and requires surgical intervention. If gynecomastia is due to the localization of body fat, then the chances of recovery are higher. This does not always require surgical intervention, as the disease can be easily cured with the help of a nutritional correction program aimed at reducing fat.

Surgical strategies vary depending on the nature of the problem. With excess body fat, simple liposuction is usually sufficient under local anesthesia. With excess glandular tissue, surgical removal of the mammary gland is necessary.