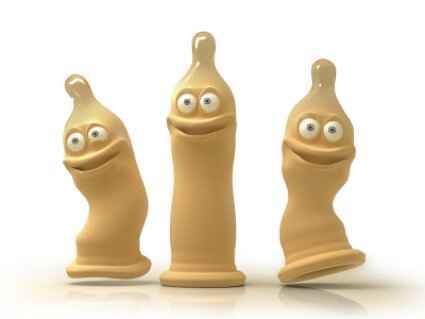 Using a condom, a faithfulally of men's and women's health, is a modern contraceptive method that can protect against unwanted pregnancy and sexually transmitted diseases.

A condom  - is a thin waterproof membrane consisting of hypoallergenic latex or other materials that a man puts on his penis in an erection state. A condom is used to collect sperm, preventing the ejaculate from entering the vagina during intercourse.

Theoretical and practical effectiveness of condoms

The effectiveness of contraception in this method depends significantly on how well we use condoms. It should be noted that their clumsy and inept use is a real health threat. When used properly, a condom guarantees remarkable efficacy. From a theoretical point of view, the method provides protection against unwanted pregnancies and sexually transmitted diseases close to 99%. In practice, unfortunately, only 84%. As you can see, the theoretical and practical aspects of efficiency do not coincide. We draw attention to the fact that the failure of the contraceptive method in many respects also depends on the time of use. Many young people (and adults), as a rule, put on a condom only at the end of the relationship, mistakenly believing that since ejaculation does not occur, then the semen does not enter the vagina. In fact, preliminary caresses excite a man in such a way that they contribute to the release of a small amount of seminal fluid, which is quite sufficient for fertilization.

How to use a condom

A condom is put on an erect penis and unfolds along its entire length. Make sure there are no air bubbles. If there is no reservoir in the condom, during use it is necessary to leave a space of about 1 cm at the end (near the head). As a lubricant, you can use special gels and creams, but only on an aqueous, but not on an oil basis! At the end of the act, the condom should be held with your fingers at the base of the penis to prevent it from slipping. Recall briefly that after the act, the penis undergoes a natural decrease in volume (which is technically called detumescence). Before you throw the condom into the bin, you can check the integrity of the contraceptive so you don’t worry about it.