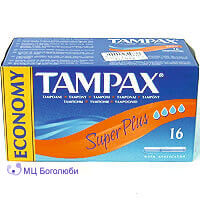 Toxic shock syndrome  - is a multisystem inflammatory response of the body to exotoxins of bacterial strains. Most often, this reaction occurs as a result of vaginal colonization by bacteria during   menstruation.

After the event received a wide response and caused a widespread public campaign against the use of tampons, the incidence rate declined sharply. Although women have become more aware of the dangers associated with the use of a tampon, and on each «tampax » package, the manufacturer honestly warns of the existing risk in small print so that later she will not sue the relatives of the deceased client, few of us take these warnings with proper seriousness. It seems to us that the danger of the syndrome is greatly exaggerated. They write on a pack of cigarettes: «Smoking causes cancer». So what? Is it because of this people began to smoke less? And, despite the warning inscriptions, the layman frivolously continues to use a dangerous product, hoping exclusively for «maybe». Here the Americans died, and maybe it will blow me over. Is not a fact. Better safe than sorry.

Syndrome Currently, the form of toxic shock syndrome, defined as «menstrual» accounts for approximately 70% of all clinical cases of the disease. Next to this form, there is another, «non-menstrual», сassociated with severe infection, including in-patient origin. Bacteria grow rapidly, causing an immune response:

Bacterial exotoxins can lead to the involvement of other organs and systems of the body, unexpected pathological changes in which lead to death.

Early diagnosis and adequate treatment prevents the progression of the disease and the development of possible complications, and also gives a good chance of recovery.

The exact causes of toxic shock syndrome are not yet fully established by scientists, but in most cases the disease is associated with strains of Staphylococcus aureus.

Staphylococcus aureus is a synanthropic microorganism of the skin and mucous surfaces of a person and can coexist with the «host», for a long period without causing disease or colonization. Тем не менее, у некоторых людей не вырабатываются антитела к стафилококку, и может развиваться синдром токсического шока.

However, some people do not develop antibodies to staphylococcus, and toxic shock syndrome may develop. Toxic shock syndrome caused by streptococcus can occur as a secondary infection, for example, against the background of the flu.

Toxic shock syndrome «not menstrual» occurs in men and women of all ages. The exact etiology of the syndrome, as mentioned above, has not yet been determined, but cases of the disease are associated with:

Scientists cannot unambiguously answer exactly how a tampon provokes toxic shock syndrome. One theory says that the swab becomes a breeding ground for bacteria due to the long time in the vagina.

Women who use tampons should be aware of the following precautions:

Before purchasing another pack of tampons, weigh all possible risks well. And to paraphrase the famous driver’s aphorism, in conclusion of all that has been said, we recall: «You aren’t not sure - don’t buy.”».