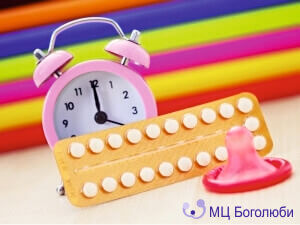 After stopping hormonal contraceptives, a woman may experience a lack of menstruation. This condition is known as  postconcepceptive amenorrhea.

The use of contraceptives, in general, regulates the menstrual cycle and provides a contraceptive effect, this is a big «plus» of these drugs. But sooner or later, the patient jumps off the «contraceptive needle», in which case one must be prepared for possible negative consequences.

Against the background of post-contraceptive amenorrhea, there are cases of и galactorrhea  - the release of milk outside the period of  lactation. . According to the hypothesis of some authors, amenorrhea associated with the abolition of contraceptives is not something extraordinary, but simply indicates that the woman’s body begins to adapt to conditions in which conception is (already) possible. However, this hypothesis has not yet been confirmed by practical data.

Most modern scientists believe that post-contraceptive amenorrhea should be considered as secondary amenorrhea, the cause of which is a low-calorie diet, carried out by a woman while taking birth control. In fact, taking pills is associated with an inevitable weight gain, which is combined with a strong water retention by the body. Based on this, patients make desperate attempts to maintain their ideal weight in order to balance the expected negative consequences resulting from hormone therapy.But at the same time, women do not realize that their behavior only worsens the situation, because the body gets used to the new diet. As a result, the patient after canceling contraceptives «gets» amenorrhea, the reason for which is often mistakenly attributed to the termination of contraception.

Post-contraceptive amenorrhea usually goes away within a few months, without the need for any special treatment methods. Do not be scared and do not hesitate to ask your  gynecologistа for the resolution of all your doubts related to contraceptives and the consequences of their reception and cancellation.