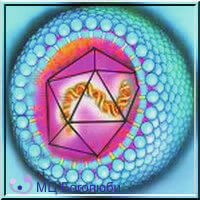 Cytomegalovirus, the largest genus in the family of herpes viruses, is ubiquitous, highly species-specific, and recognizes humans as the only «host». CMV infection is endemic. Its prevalence is associated with socio-economic conditions and geographic regions.

Routes of transmission of cytomegalovirus

Cytomegalovirus is the most common cause of congenital infection in the newborn. 25-50% of children become infected by contact with vaginal discharge during childbirth and 30% during breastfeeding.

In most children, the cytomegalovirus infection is asymptomatic. One of the serious problems that CMV can bring is deafness. It can occur after the first year of life, but it often happens that the disease develops gradually. CMV mother is at great risk for her baby's health during pregnancy. A baby can be born prematurely, microcephaly and intracranial calcifications often develop. Mental retardation, neuromuscular problems, optic atrophy are also noted.

Signs that suggest that CMV infection is present are: :

All of the above symptoms may be associated with CMV infection, but do not allow talking about it with complete confidence.For this amniocentesis must be performed. Viral DNA can be found in the amniotic fluid, the presence of which already accurately states cytomegalovirus infection.

Unlike other herpes viruses, CMV is not sensitive to acyclovir. Ganciclovir is well established, which is successfully used in neonatal practice and has already been widely tested in adults. An alternative to ganciclovir, with the same mechanism of action, is foscarnet.