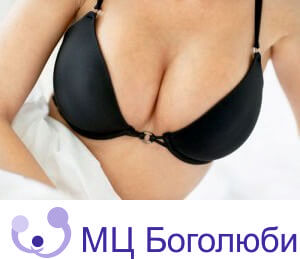 Fibrocystic mastopathy  - is a benign condition, which is characterized by the presence of fibrous areas in the breast, the appearance of cysts and nodules of various sizes, palpable. In most cases, the phenomena of mastopathy by themselves decrease after menopause.

Fibrocystic mastopathy is characteristic of patients aged 30 to 50 years, however, the disease can affect women during  menopause, especially when hormone replacement therapy is used.

It is known that the development of the disease is closely related to hormonal fluctuations in the body at different phases of the monthly cycle. More prone to this disease are women whose breasts are rich in glandular tissue. The likelihood of mastopathy also increases in patients who have never been pregnant, as well as those who have a family history of the disease.

How to recognize fibrocystic mastopathy

Fibrocystic mastopathy usually affects both breasts. On palpation of the mammary gland, agglomerates of different sizes (from a few millimeters to several centimeters) or a moving mass in the gland tissue without signs of skin retraction are detected. By the beginning of menstruation, nodal and cystic regions tend to increase in volume. Mastopathy leads to a feeling of tension in the chest, soreness, which pass with the end of menstruation.

Mastopathy does not increase the likelihood of  breast cancer  and therefore is not a risk factor in this regard. However, the risk of malignant tissue degeneration exists with , atypical epithelial hyperplasia, which causes subjective symptoms that are difficult to distinguish from signs of fibrocystic mastopathy.

Methods for the diagnosis of fibrocystic mastopathy

From a histological point of view, hyperplasia is characterized by excessive growth of breast epithelial cells, some of which are an abnormal structure that can eventually undergo a malignant transformation. Taking into account the fact that benign seals in the breast are not easy to distinguish from malignant, you should definitely consult with a  gynecologist or mammologist for an initial assessment of your condition. The diagnosis of the disease should be confirmed by:

Usually fibrocystic mastopathy does not need special therapy. But her symptoms should not be ignored. The condition requires a systematic medical examination, mammography. If there is breast pain in the premenstrual period, it makes sense to take painkillers. In some cases, the doctor may recommend the use of creams or gels, which include progesterone. When the symptoms of the disease represent significant inconvenience or a serious threat, it is possible to remove nodules and cysts surgically.