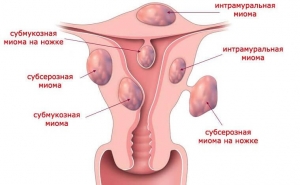 What are submucous nodes and how often are they diagnosed?

Submucous nodes (fibroids) are benign formations that are localized in the submucosal layer and partially protrude into the uterine cavity. There are 4 types of submucous fibroids: zero - when the fibroid on the leg and only in the mucous layer is usually small; the first type - myoma is partially located in the submucosal and muscle layer; the second type - most of the fibroids in the muscle layer; the third type is when there is no muscle tissue between the node and the mucous layer.

Why are submucous fibroids formed in the body?

The reason for the formation of submucous miomas is primarily hormonal disorders, namely an increase in estradiol levels. As a rule, the formation and growth of all tumors accompanies estradiol elevation, that is, an increase in the level and excess of estrogens.
As for estrogens, their depot is found in adipose tissue. Therefore, any sharp set of excess weight can trigger the development of tumor processes.
The third reason for the development of submucous nodes is inflammatory diseases: wrong, irrational, not treated or treated in time.
The cause may also be any mechanical damage to the endometrium (abortion, curettage etc.).
An important role is played by genetic predisposition, chronic stress, the absence of pregnancy at 30 years of age and breastfeeding.
The use of improperly intended oral contraceptives or their improper use can contribute to the formation of submucous nodes. The majority of the population believes that the main objective of contraceptives is to prevent pregnancy. But in fact, contraceptives also have an additional, therapeutic effect, so they should never be taken without a doctor’s prescription.
Another factor that increases the risk is hypertension: it can provoke the formation of submucous nodes.
Another provocateur is the thyroid gland. It plays a large role in the regulation of the menstrual cycle. Therefore, if there are diseases of the thyroid gland, hormonal disorders, any autoimmune processes - all this can provoke the formation of submucous myomas.

What symptoms may indicate the presence of submucous nodes?

The first bell is a violation of the menstrual cycle, for example, spotting before, after or inside the menstrual cycle, heavy menstruation, as well as heavy menstruation, which ends with bleeding, shortening the menstrual cycle.
Due to an increase in discharge during menstruation, hemoglobin levels decrease, anemia develops, therefore, the accompanying symptoms appear: general weakness, dizziness, pallor of the skin.
Symptoms also include pain in the lower abdomen, pain during intercourse, bloating or an increase in the abdomen, impaired urination and stool. Submucous fibroids can result in infertility. In the later stages - a sharp rise in body temperature, sharp pains in the lower abdomen.

How are submucous fibroids diagnosed?

When viewed on a gynecological chair, provided that the node is already large, the doctor may notice a change in the size of the uterus. If the node is small and does not give obvious symptoms, the diagnostic method that allows it to be detected is  ultrasound, , transvaginal or transabdominal, CT and MRI.

How to treat uterine fibroids?

Depending on the type of submucoin myoma, its location, size, on which leg it is placed (thin or thick, the number of vessels in it, etc.) and other factors, doctors decide how to remove the node.
Removal can occur  hysteroscopically, when a special device (hysteroscope), which is equipped with a video camera, penetrates through the vagina and cervix into the uterine cavity and picks up the node, destroying the vascular leg that fed it and the bed where it grew. Most submucous nodes are removed hysteroscopically.
The second method - laparoscopy, involves penetration into the uterine cavity through the abdomen. This method is resorted to when the nodes are large or their location does not allow them to be removed hysteroscopically.
It is worth noting that the mechanical removal of the submucous node is not enough to recover. This is just the beginning of the treatment! It is necessary to eliminate the factors that led to its formation. Namely: to adjust the hormonal background, stabilize the condition of the woman. Otherwise, the disease will appear again. After removal of the submucous nodes, hormone therapy continues for at least another three months. In most cases, women are prescribed contraceptives for therapeutic purposes, and they are prescribed for at least three to six months.

Are there ways to get rid of submucous nodes without surgery?

Yes, there is conservative treatment, in particular, hormone replacement therapy. With very small sizes and an absolute absence of symptoms, if in the near future a woman does not plan a pregnancy or for some reason she wants to postpone the operation, then hormone therapy is prescribed. It slows down the growth of the node for a certain period of time.
Another treatment option is embolization of the uterine arteries. This overlap of the uterine arteries by introducing a substance that sticks together the main vessels of the uterus. As a result, myoma lacks nutrition, so it stops growing, and eventually mummifies. It should be noted that embolization is resorted to only in the case of small fibroids.
If the node is large and it stops feeding, necrosis begins, that is, the node begins to die and rot inside the uterus. This causes severe pain, fever and poses a risk to the patient's life. In this case, you must quickly respond and remove the node.
ЕAnother critical situation is the breakdown of the knot from the leg. At the same time, the woman experiences cramping pains, because the cervix opens and the woman actually gives birth to a knot. This is called the birth of a submucous node. The worst complication of this condition may be bleeding, as the node comes off the leg, which has blood vessels.

Is it possible to get pregnant with submucous nodes?

No, It is Immpossible. The fact is that submucous nodes are located where pregnancy develops. In addition, the node feeds not only on blood, but also on hormones. And even if pregnancy occurs by some miracle, the knot will constantly rob the embryo, it will not have enough blood supply, hormones, etc. Therefore, we can say that pregnancy is possible, but gestation is not.

How do women prevent knot formation?

To prevent the formation of submucous nodes abortion, should be abandoned, surgery and any trauma to the endometrium should be abstained, and pregnancy should be attempted for the first time before the age of 30. And be sure to at least once a year undergo a full examination by a gynecologist.