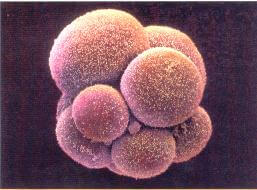 In previous articles on  the ovarian cycle  and postovulatory period, we focused on the processes that occur in the female body before and at the time of conception.The next cycle of our articles will be about what happens next with a fertilized egg.

After the embryo reaches the two-cell stage, it carries out a series of mitotic divisions (crushing  process), the result of which is an increase in the number of cells. These cells (blastomeres) decrease with each division of fragmentation to the eight-cell stage and form a loose conglomerate. Already after the third division, the blastomeres maximize the area of intercellular contacts, forming a compact cell mass that is held together due to dense conglomerates.This process, known as compaction, leads to the separation of external cells from internal cells, which are interconnected by gap junctions (nexuses). Approximately 3 days after fertilization, the cells of the embryo are divided again, forming a 16-клеточную cell morula  (mulberry). The inner cells of the morula form the inner cell mass, while the outer cells form the outer cell mass. The inner cell mass gives rise to the tissues  of the embryo itself, and the outer cell mass forms  a trophoblast, which later becomes part  of the placenta.

At about the same time that the morula enters the uterine cavity, fluid begins to leak through the transparent zone from the microenvironment of the embryo, which accumulates in the intercellular spaces of the internal cell mass. Gradually, the intercellular spaces merge and form one cavity - the blastocele. At this time, the embryo is called a blastocyst. The cells of the inner cell mass, now called embryoblast, are located at one pole, the cells of the outer cell mass, or trophoblast, become flat and form the blastocyst wall. The transparent zone disappears, which makes implantation possible.

Trophoblast cells, which are localized above the embryoblast pole of the blastocyst, begin to grow into the epithelium of the uterine mucosa by approximately  6 days Attachment and invasion of trophoblast are associated with integrin molecules that are secreted by trophoblast cells. Implantation is the result of the interaction of trophoblast and endometrium. By the end of the first week of development, the human embryo passes through the stages of morula and blastocyst and begins implantation into the uterine mucosa.

The uterus during implantation

During the menstrual period, the endometrium passes through three stages, which include:

At the time of implantation, the uterine mucosa is in the secretory phase of the cycle, during which the uterine glands and arteries become spiral, and the connective tissue swells. Normally, a human blastocyst is implanted in the endometrium along the posterior or anterior walls of the uterus, ingrowth comes between the ductal ducts of adjacent glands.