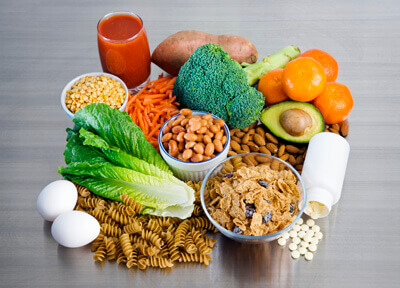 Speaking about nutrition during pregnancy, first of all, means dispelling the very common and dangerous myth that the expectant mother should eat for two. Of course, pregnancy leads to intense changes in the female body, however, many of them are reversible.

So, let's highlight some basic rules that must be followed and some basic criteria that must be met. A pregnant woman is required to monitor her BMI or  body mass index. Its formula is very simple. Divide your weight by your height squared. The normal range is between 19.8 and 26. Assuming that at the beginning of pregnancy a woman who is 170 cm tall weighs 65 kg. (BMI = 22.49), then within nine months the lady's weight can physiologically increase by 11.5 - 16 kg. Women who «started» сtheir pregnancy with a mass index between 26 and 29 should try to limit their weight gain from 7 to 11.5 kilograms. Those future mothers whose BMI is more than 30 already before pregnancy should not increase their weight by more than 7 kg before the end of the term.

A pregnant woman should realize that weight gain cannot be left to chance. Excessive «enlargement» does not mean negative changes from an aesthetic point of view, the main danger lies in such complications as inflammation of the sciatic nerve, fetal distress, premature birth, miscarriage, etc.

Products to avoid during pregnancy: soft brie cheese, raw fish (sushi, sashimi), raw meat (carpaccio), ready-made salads in the culinary department of the supermarket, raw milk from the market (use only after boiling), raw eggs.

Vegetables should be consumed only after thorough washing. Wash your hands after handling raw meat or eggshells. .

It should be noted that weight gain is most significant in the second half of pregnancy (from the twentieth week onwards). Thus, if you have maintained good weight in the first twenty weeks, then this is not a reason to go all out in the next step. A pregnant woman should keep in mind that this weight gain is not associated exclusively with a set of fat. At the end of pregnancy, the fetus weighs about three and a half kilograms plus the amniotic fluid in which it is immersed and, of course, the placenta, which alone will weigh about 500 grams. In addition, most expectant mothers in the later stages deal with a more or less intense water retention in the body.

After childbirth the «extra» kilograms gained from the fetus and placenta will leave immediately, but with the real fat reserves accumulated over nine months, it will not be possible to part so easily.

ЭThe energy needs of a pregnant woman increase depending on her initial physical condition. If her weight was classified as normal, then the additional calorie requirement would be 250 units. If we are dealing with a woman of insufficient weight, then you can increase calorie intake by 350 units. Overweight woman calories should not exceed 200 kcal per day.

Proper nutrition is varied and balanced, no matter how trite it sounds. In the diet, the presence of both animal and vegetable proteins is desirable - meat, fish, eggs, legumes. Carbohydrates, which are our main source of energy, should not be full of pastries and sugars. Vitamins, of course, are best obtained from fruits and vegetables. Iron (spinach, whole grains, nuts) is important for the formation of a baby's red blood cells. To prevent such a pathology as neural tube splitting and proper formation of the fetal spine in the first half of pregnancy,  folic acid. is extremely necessary. Milk, fruit shakes and teas, of course, are indicated throughout pregnancy.

Do not overeat at one meal. It’s better to eat a little, but often. For example, three main dishes and several snacks, early in the morning and in the middle of the day. The same goes for fluids. Give preference to fresh foods, trying to avoid sweeteners, preservatives, dyes. Pay attention to the information on the labels of various products, their composition and nutritional value. Your pregnancy opens up the possibility for you to change for the better your wrong eating habits.

Finally, do not forget to follow some basic hygiene rules, such as washing your hands thoroughly before cooking, never take expired foods, although it is obvious that they are still edible, and avoid caffeinated drinks. Eat slowly and with pleasure, setting aside all anxieties for later. Remember that now your health is also the health of your baby.