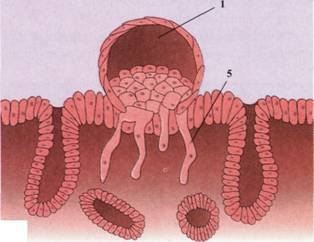 Since 50% of the genes of the implanted embryo are of paternal origin, it is a foreign body for the mother’s body and can potentially be rejected by the mother’s immune system. (And then we can talk about such a rare occurrence as immunological infertility.) The embryo is protected by a complex of factors that include the production of immunosuppressive cytokinins and proteins, as well as specific HLA-G molecules that belong to the class IB of the main histocompatibility complex and block recognition the embryo as foreign tissue. If the mother has autoimmune diseases, for example, lupus erythematosus, embryo rejection occurs due to antibodies, the production of which is caused by the disease, and their secondary attack of the embryo. .

Sometimes abnormal implantation sites occur  even in the uterus. Normally, a blastocyst is implanted along the posterior or anterior walls of the uterus. Occasionally, a blastocyst is implanted close to the internal pharynx of the cervix, which in the late stages of placenta development leads to blockage of the pharynx (placenta previa) and severe, life-threatening bleeding in the second half of pregnancy and during childbirth.

Occasionally, implantation sites are localized outside the uterus, causing the development of an ectopic pregnancy. Such places may be the abdominal cavity, ovary, or fallopian tube. 95% of ectopic pregnancies fall on the fallopian tube, and most of them are localized in its ampullar part. In the abdominal cavity, the blastocyst often attaches to the peritoneum in the rectal-uterine space, or Douglas pocket. The blastocyst can also attach to the omentum. Sometimes a blastocyst develops in the ovary itself, which is called  primary ovarian pregnancy..Most ectopic pregnancies end in the death of the embryo around the second month of pregnancy, which is accompanied by significant pain in the mother’s abdomen and severe bleeding.

Abnormal blastocysts are very common. So, for example, in a series of 26 implanted blastocysts aged 7.5 to 17 days received from patients with normal fertility, 9 (34.6%) were abnormal. Some consisted only of synthism, while others had varying degrees of trophoblast hypoplasia. In others, there was no embryoblast, and in some, the germinal disk had an abnormal localization.

Most abnormal blastocysts do not cause any manifestations of pregnancy, since their trophoblast is so underdeveloped that the corpus luteum could not exist for a long time. Such embryos are rejected with another  menstrual bleeding. In rare cases, trophoblast develops and forms placental membranes, but there is little or no embryonic tissue. Such cases are known as hydatine-like vesicles, they produce a large amount of human chorionic gonadotropin, and can transform into benign and malignant tumors (choriocarcinomas).

A genetic analysis of these vesicles shows that although the male and female nuclei are genetically equivalent, they are functionally different. Most vesicles form as a result of fertilization of an oocyte in which there is no nucleus, followed by duplication of male chromosomes to restore the diploid set. These data indicate that it is the paternal genes that provide the development of trophoblast, since this tissue forms in the vesicles even in the absence of a female nucleus. .

Reproductive disorders are often found in the pre- and post-implantation period. Even in fertile women, under optimal conditions for pregnancy, approximately 15% of the oocytes are not fertilized, and another 10-15% begin crushing, but are not implanted. Of 70-75% of the embryos that were implanted, only 58% survive to the second week, of which 16% are abnormal.