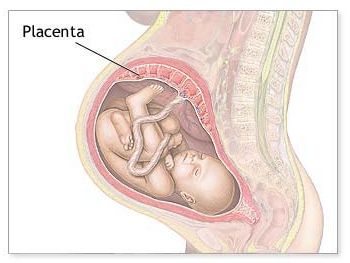 Changes in trophoblast.  At the beginning of the second month of embryogenesis, the trophoblast has a large number of secondary and tertiary villi, which give it a radiant appearance. The villi are rooted in the mesoderm of the chorionic plate. Over the next months, numerous small branches grow into existing surrounding lacunar and intervillous spaces from existing stem villi. At first, these newly formed villi are primitive, but by the beginning of the fourth month the cytotrophoblast cells, as well as some connective tissue cells, disappear. The disappearance of cytotrophoblast cells begins from smaller villi and proceeds to larger ones. Although some elements of the cytotrophoblast remain in large villi, they do not take part in the metabolism between the two circulatory systems.

Chorionic villus and decidual membrane. In the first weeks of development, the villi cover the entire surface of the chorion. As pregnancy progresses, the villi at the embryonic pole continue to grow, giving rise to the villous chorion.

The structure of the placenta

At the beginning of the fourth month of development, the placenta has two parts:  birth, formed by the villous chorion, and the mother, formed by the decidual membrane. During the fourth and fifth months, the decidual membrane forms numerous decidual septa that protrude into the intervillous spaces, but do not reach the chorionic plate. As a result of the development of septum, the placenta is divided into numerous compartments.

At the end of pregnancy, the placenta becomes of disk-shaped form with a diameter of 15-25 cm and of about 3 cm thickness and a 500-600 g. of weight. During childbirth, it breaks away from the uterine wall and approximately 30 minutes after the birth of the baby, it is expelled from the uterine cavity.

The main functions of the placenta are

The exchange of gases, such as carbon dioxide, oxygen, carbon monoxide, occurs through simple diffusion. Given that the fetus absorbs 20-30 ml of oxygen every minute from maternal blood, it becomes clear that even a slight interruption in the supply of oxygen will be fatal to the fetus. The exchange of nutrients and electrolytes, such as amino acids, free fatty acids, carbohydrates and vitamins, is intense and increases with increasing gestational age.

At the end of the fourth month the placenta produces a sufficient amount of  progesterone to maintain pregnancy in case of removal of the corpus luteum or its functional insufficiency. In addition to progesterone, the placenta during pregnancy produces increasing amounts of estrogens  (mainly estriol), which reach a maximum level at the end of pregnancy.High estrogen levels stimulate uterine growth and mammary gland development.

Syncytiotrophoblast also produces  human chorionic gonadotropin  (hCG), whose action is similar to the action of the luteinizing hormone of the anterior pituitary gland. This hormone is excreted in the urine of the mother, and its presence in the early stages of pregnancy is used as an indicator. Another hormone that the placenta produces is - somatomammotropin  (Another hormone that the placenta produces is somatomammotropin (placental lactogen). This substance is similar to growth hormone and provides the fetus with priority use of glucose from maternal blood, which is why the mother to some extent serves as a diabetic factor.

Most maternal hormones do not pass through the placenta. The degree of penetration of other hormones, such as tyrosine, is low. A significant danger are some synthetic progestins, which penetrate the placenta very quickly and can cause masculinization of the female fetus. Even more dangerous is the use of synthetic estrogen diethylstilbestrol, which easily passes through the placenta. This substance causes vaginal cancer and testicular abnormalities in individuals which were succumbed to its action during fetal development.

Although the placental barrier is often considered protection against the damaging effects of environmental factors, many viruses such as rubella, cytomegalovirus, Coxsackie, smallpox, chickenpox, measles, polio easily pass through the placenta. Once inside the fetus, some viruses cause diseases, which in turn can lead to cell death and  congenital malformations. . Unfortunately, most drugs and their metabolites penetrate the placenta and many of them cause serious damage to the fetus.