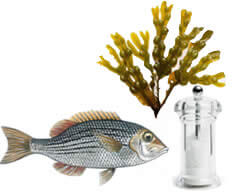 Providing the pregnant woman with the necessary amount of iodine is of great importance for the proper growth and development of the fetus. The norm of iodine in the food of an adult woman is about 150 micrograms per day. During pregnancy, this rate increases by 25 micrograms, and ultimately should be about 175 micrograms / day.

As you can see, the storehouse of iodine is a fish, which we do not really pamper ourselves with. A lot of iodine in kelp, or seaweed. This inexpensive product can be recommended not only for the prevention of iodine deficiency, but also to speed up the metabolism. Vegetables contain a sufficient amount of iodine only if they were grown on soils rich in this mineral. In addition, it is advisable to use table salt with iodine for cooking. Unfortunately, to date, the consumption of iodized salt has not yet reached the proper level to prevent iodine deficiency in the diet of Ukrainians.

Our body uses iodine to synthesize thyroid hormones. This mineral is a fundamental element in   tetraiodothyronine  (Т4) and triiodothyronine (Т3). Iodine is also associated with antioxidant activity. It protects the body from damage to hypercholesterolemia and many cardiovascular diseases (atherosclerosis and hypertension).

Extensive research by foreign scientists on the consumption of iodine in food and the manifestations of the symptoms of its deficiency showed that, on average, the proportion of iodine provided with food does not reach even the minimum requirement. The World Health Organization (WHO) has estimated that more than 20 million people worldwide suffer from brain diseases due to a lack of iodine in their diet. These data put the diet focused on iodine-containing products in first place in the world ranking for the prevention of causes of mental retardation. A specific symptom of iodine deficiency is goiter. Less commonly, toxic goiter (Plummer's disease), hyperthyroidism, cretinism may occur.
Iodine deficiency in adulthood is also responsible for such manifestations as lethargy, chronic fatigue, and premature baldness.

Iodine during pregnancy is necessary to prevent complications in the development of the fetus, such as:

These complications associated with iodine deficiency during pregnancy can be easily prevented by providing 1 microgram per gram of body weight per day. Although this contribution will cover only 40 - 50% of the recommended daily allowance.