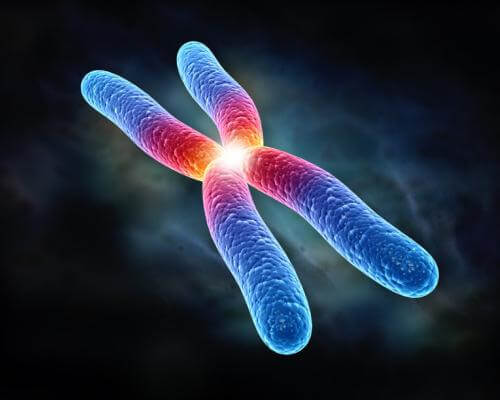 A normal human somatic cell contains 46 chromosomes, a normal gamete contains 23 chromosomes. Quantitative chromosome abnormalities can occur during meiotic or mitotic division. Sometimes a chromosome break occurs and parts of it join another chromosome. Such translocations can be  balanced, when the breakdown and association of two chromosomes is carried out without loss of important genetic material and individuals are normal or unbalanced, when part of one chromosome is lost and the genotype changes. For example, unbalanced translocations between the long telosomics 14 and 21 during meiosis cause gametes with an extra 21 chromosomes to appear. These gametes are one of the causes of  Down syndrome.

Chromosome can relate to one or more chromosome numbers and occur usually due to chromosome breaks. Gaps are the result of external factors such as radiation or chemicals. The consequences of a rupture depend on the fate of the ruptured parts. In some cases, the severed part of the chromosome is lost, and a child with a partial deletion of the chromosome is characterized by certain abnormalities. A syndrome caused by a partial deletion of a short arm of chromosome 5 is known as  «cat cry syndrome». The crying of such children is like a cat scream. They are also characterized by microcephaly, mental retardation and congenital heart defects. Many other relatively rare syndromes are known due to the loss of part of a particular chromosome.

Many congenital defects of a person are hereditary and are inherited clearly according to Mendel’s law, known from school. In many cases, a defect is a direct legacy of a change in the structure or function of a single gene, hence the name -  mutation of one gene. According to statistical calculations, this type of defect makes up 8% of all human congenital malformations.

The use of molecular biology methods in embryology has enriched humanity with the knowledge of the genes responsible for normal development. In turn, mapping the human genome provides information on the position of many of these genes, and further analysis reveals some mutations. In short, the connection between the key developmental genes and their role in clinical syndromes becomes apparent.

In addition to congenital malformations, defective genes cause a significant number of congenital metabolic disorders. These diseases, among which phenylketonuria, homocystinuria, and galactosemia are best studied, are often accompanied by, or lead to a different degree of mental retardation.

One of the methods for determining genetic abnormalities is the method of  Giemsa bands (G-bands). (G-полос). According to this method, chromosome preparations are trypsinized and stained according to Giemsa to reveal a pattern of light and dark stripes, which is unique for each chromosome.

A new method of molecular biology - - in situ fluorescence hybridization (FISH)using specific DNA markers for the identification of deletions of genetic material - has significantly advanced the possibilities for the qualitative determination of gene and chromosomal abnormalities.