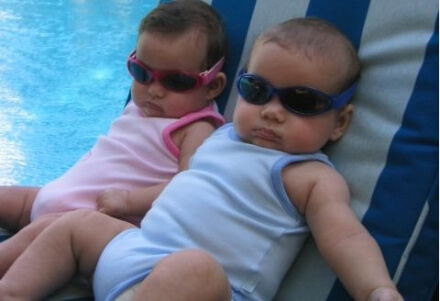 The structure of birth membranes in twins can vary greatly, depending on the type of twins. About two-thirds of the twins are dizygotic; the frequency of their appearance is 7-11 per 1000 births, increasing with increasing age of the mother. They are a consequence of the simultaneous ovulation of two oocytes and their fertilization with two different spermatozoa. Since both zygotes have different genetic compound, the similarity of such twins is nothing more than the similarity of ordinary brothers or sisters. They can be of the same or different gender. Both zygotes are implanted individually in the uterus, each developing its own placenta, its own amnion and its own chorion. Sometimes both placentas are placed so close that they merge. Accordingly, the shells can also contact and merge. Sometimes each of the dizygotic twins can have two different types of red blood cells (red blood cell mosaicism).This suggests that the fusion of the placenta was very close and promoted the exchange of red blood cells. .

Another type of twins develops from one fertilized egg. They are called  monozygotic twins. Monozygotic twins are born with a frequency of 3-4 per 1000 pregnancies as a result of fetal cleavage at different stages of development. It is believed that the earliest cleavage can occur at the bicellular stage. After this cleavage, two separate zygotes are formed. Both blastocysts are implanted separately, each embryo has its own placenta and chorion. Although the organization of the shells of monozygotic twins resembles that of dizygotic twins, a monozygous pair can be recognized due to the similarity of blood groups, fingerprints, sex, appearance (eye color, hair, etc.).

The cleavage of the zygote occurs mainly at the stage of early blastocyst. The inner cell mass is split into two separate groups of cells in the middle of one cavity of the blastocyst. Both embryos share a placenta and a chorion, but separate amniotic cavities. In rare cases, the cleavage of the embryos occurs at the stage of the bilayer germinal disk, before the appearance of the primary strip. This type of splitting leads to the formation of twins with a single placenta, chorion and amnion. Although the twins share a common placenta, the blood supply to each of them is well balanced.

Triplet develops quite rarely (1 in 7600 pregnancies), and the birth of four, five or more twins occurs even less frequently. In recent years, the birth of multiple twins, for example six, has become more frequent and concerns women who used gonadotropins to stimulate ovulation.