Baby’s colicky pain, what is the reason 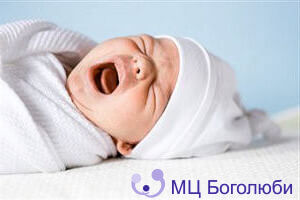 Diagnosis of colic in a newborn

The main criterion for identifying a disorder is paroxysmal crying attacks. The diagnosis of colic in a newborn involves the a priori exclusion of any other cause (intestinal obstruction, peritonitis,  hernia, pyelonephritis, neurological problems, etc.

Causes of colic in a newborn

Scientific research has not precisely established yet the true causes of colic in newborns, and the condition is considered a para-physiological phenomenon with an uncertain and multifactorial etiology. One hypothesis of colic is associated with aerophagy - excessive ingestion of air by a child during feeding and flatulence, as a result of intestinal fermentation of milk.Кроме того, высокий уровень стресса у кормящей матери также провоцирует наступление этих колик. In addition, the onset of these colic also provokes a high level of stress in a nursing mother.

According to some authors, gaseous infant colic is associated with food. However, these disorders occur with the same frequency, both in breasfeeding babies and in bottle feeding babies.

We can assume the presence of an allergic reaction in a child to cow's milk protein if colic is accompanied by diarrhea, vomiting, skin rashes. Statistics indicate that neonatal colic is characteristic of 30% of newborns and disappears spontaneously without obvious reason in the third to fourth month of life.

Typically, colic is marked by the evening, lasting from one to three hours, and then disappear and resume the next day.

Phytotherapy is traditionally offered as an aid to the child, which involves the use of herbal preparations of carminative and antispasmodic effects (fennel, anise, chamomile, melissa).

You should also pay attention to the diet of a nursing mother. It should be low in common food allergens (milk, soy, eggs, nuts, wheat, seafood). This measure may relieve excessive crying in some children. Prebiotics can play a positive role in the treatment of colic in a newborn.

Given the possible psychosomatic nature of colic, music can help a child during an attack,do something good for the baby, take it on the arms, dance with it, or put a warm diaper to the tummy.