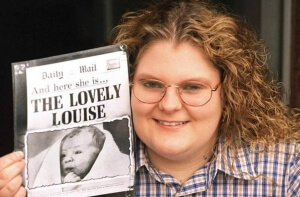 Lesly and John Brown were a young couple from Bristol who had tubal obstruction diagnose. Treatment in different clinics did not give any results. Everything seemed in vain. But the desire to become parents exceeded all failures.

And so, in 1977 they were invited to take part in the experiment, which was conducted at the Oldham Clinic by doctors Patrick Steptow and Robert Edwards. On November 10, Lesly Brown's oocyte was fertilized «in vitro». Using laparoscopy, Dr. Steptow removed an oocyte from Lesly Brown's ovary and handed it to the embryologist Edwards. Dr. Edwards paired Lesly's oocyte with her husband John's sperm. After fertilization, the embryologist placed the egg in a special protective environment, where cell division began.

The day after  fertilization , the doctors «moved» the fertilized egg into Leslie’s uterine cavity. The egg successfully attached to the wall of the uterus, the embryo began to develop day after day, month after month. Pregnancy was successful, without complications. Leslie was under the vigilant control of doctors who carefully examined her, observed the development of the fetus using  ultrasound diagnostics  and other methods. Nine days before the planned birth, the expectant mother's blood pressure rose. Doctors unanimously decided to have a cesarean section.

At 23 hours 45 minutes, on July 25, 1978 a girl was born weighing 2.61 kg. She was named Louise Joy Brown. She had blue eyes and blond hair. At first glance, she seemed healthy. After a medical examination of pediatricians, no abnormalities were also found. The fate of the girl turned out well. She grew up and developed like all normal children.

Soon another girl was born in this family, conceived by the «in vitro» method. She was named Nataly. She got ahead of her older sister and became the first «in vitro child», who naturally became pregnant and gave birth in 1999. Over time, and Louise got married and gave birth to a son by the traditional method.

In 2010, the British embryologist Robert Edwards, who was one of the first inventors of artificial insemination therapy, received the Nobel Prize in medicine. Unfortunately, Patrick Steptow died in 1988. «Today, Edwards's plan is a reality, and it brings joy to people who suffer from infertility», - said the Nobel Committee.

Lesly Brown's pregnancy gave hope to hundreds of thousands of couples. Since then, thanks to artificial insemination, about 4 million children have been born. There are known examples of many world celebrities who announced to the whole world that their children were conceived by artificial methods. The services of modern assisted reproductive technologies were used by Julia Roberts, Celine Dion, Jennifer Lopez. Thanks to this method, Al Pacino became the father twice.

In Ukraine, the first successful attempt to apply«in vitro » fertilization technology was made at the Laboratory of Cryobiology of the Human Reproduction System of the Institute of Problems of Cryobiology and Cryomedicine of the National Academy of Sciences of Ukraine (Kharkiv). The first child was born in Ukraine conceived by this method in 1991. It was also a girl.

In Lutsk (city in Western Ukraine, situated near Bogoliuby MC), the first child after «in vitro» fertilization at the Bogoliuby Medical Center of Reproductive Medicine using the in vitro method was born on February 1, 2012 in the Lutsk maternity hospital, and this was also a girl.